Allison Holmgren (middle), an industrial engineering graduate student from Pleasanton, CA, is a five-year member of the Institute of Industrial Engineers, and participated in PolyHouse 2008, a student managed home renovation project for a deserving family. Holmgren is also a Cal Poly Dean’s List recipient for 10 quarters, a member of engineering honor society Tau Beta Pi, and she served as an air warfare systems intern at Raytheon Missile Systems in Tucson, AZ, where she also earned certification as a Certified Raytheon Six Sigma Specialist.

Cameron Schlemer (far left), an industrial engineering student from San Luis Obispo, CA, has been on the Industrial Engineering Student Fee Committee since 2006 and is an officer in the Institute of Industrial Engineers. Cameron was also a project manager on the PolyHouse 2008 project, and has been a Dean’s List recipient for four quarters. She interned with Boeing in Washington. She minored in Psychology. 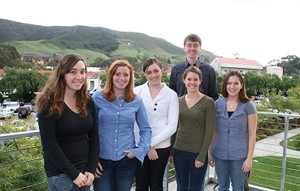 Ana Hopper (2nd from right)  an industrial engineering graduate student from Laguna Beach, CA, Hopper has served as president of the College of Engineering Ambassadors and is a member of the Institute of Industrial Engineering and Alpha Pi Mu, the IE honors society. Hopper also completed three internships: Cisco Systems in San Jose, CA; Boeing in Everett, WA; and REC Solar in San Luis Obispo, CA.

Laura Dearborn an industrial engineering senior from Visalia, CA, Dearborn has served as the treasurer of the Institute of Industrial Engineers for two years. She has been named to the President’s List for two years and the Dean’s List for eight quarters. Dearborn, a College of Engineering Ambassador, completed internships with both Northrop Grumman in Woodland Hills, CA, and Duncan Enterprises in Fresno, CA.

Angela Muscat from Issaquah, Wash., is a student in the blended B.S. + M.S. industrial engineering degree program. She is active as an Engineering Ambassador, serving as chair of the training committee, and a member of numerous honor societies, including Mortar Board, Alpha Pi Mu, Rho Lamba, Order of Omega, and the National Society of Collegiate Scholars. She lists her co-op experience with a high profile government agency as her most significant accomplishment while a student at Cal Poly. In this capacity, Muscat served as a lead on a division level project and made contributions in the areas of Human Systems Integration, Program Management and Systems Engineering. She earned the Exceptional Performance Award for her work. Muscat also received numerous awards as a member of Delta Delta Delta Sorority and lead the organization as president during a difficult transition period. 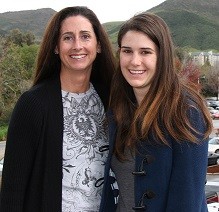 Laura Ashley Harris is an industrial engineering senior from San Ramon, Calif. Harris serves as an Engineering Ambassador and is active in many organizations, including: Alpha Pi Mu, the industrial engineering honor society; Chi Omega PanHellenic Sorority; the Institute of Industrial Engineers; the Sales Engineering Club; the National Society of Collegiate Scholars; and Mortar Board, the University honors society. She has held numerous leadership positions in Cal Poly SWE since 2007 and serves as the current president. As vice president of Corporate Relations for SWE, Harris built relationships that resulted in funding support and more than $25,000 in corporate-sponsored scholarships. She also led an outreach effort that reached over a thousand students by sending SWE representatives into their hometown high schools.

Gabby Igel, an industrial engineering senior from Encinitas, Calif., is working with an interdisciplinary team to design and produce a solar rechargeable light and cell phone charger (LunaLight) for use in developing countries. She has held officer positions in Engineers Without Borders and the Engineering Student Council.  She has interned with Solar Turbines and Parker Aerospace, and in India with Athena Infonomics and Yieldopia Energy.